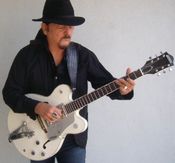 For those unfamiliar with Jay Gordon, he is a West-Coast, certified
Bad Mofo Blues guitar player. Endorsed by Gretsch, he coaxes enough
energy outta that "big white guitar" to power most third world countries!
Seriously, though, Jay has opened for the likes of Albert Collins and
Johnny Winter and has played Clapton's Crossroads Guitar Festival.
Add to that his Grammy nominee, and his pedigree is in place.